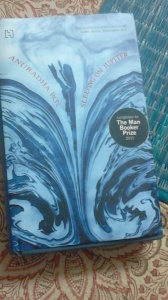 I had picked up The Folded Earth quite by chance in an Oxford book store while waiting for a friend at the Cha Bar. It was such a lovely engrossing read that I quickly read The Atlas of Impossible Longing. Both books exceled in its narrative of the place of the story. Vivid description of the roads and alleys, the routine and mundane, people, relationships, trees, animals, flowers, food…they made me imagine the whole landscape. I recall how she writes about a girl bringing a hot potato for her teacher in The Folded Earth. That detailing of when you are holding something too hot, you need to keep moving it from one hand to the other, so that before its unbearably hot for one palm, it moves to the other and doing that cools the potato. And a man who relates to birds and animals in a different way like he understand their language, which of course the world cannot fathom and he is labelled loony. There was a description of chopping vegetables in The Atlas of impossible Longing, and a walk to the ruins, coming to Calcutta from the outskirts and being overwhelmed…the narrative is so good that you see it, actually, etched some-place in the memory.

I was hesitant to start Sleeping on Jupiter. The introduction to the book was about a child who sees her father’s brutal killing. I did not really want to read another gut wrenching story.

But there was curiosity, and that won.

The story begins with a train journey, instantly reminded me of The Ladies Coupe (Anita Nair). I have a thing for train journeys and sunsets.

Beautiful description of a temple town near the sea, the conch shells, the sea, with its salt in the air and sound, what people do to earn a living, around the temple and pilgrims and tourists, entwining their lives. What’s remarkable about the story is how the paths of so many different people cross, seemingly unknown to each other, but walking into each other’s lives and playing a role.

So often I think that there are these unseen strings and we are all puppets.

Expressions from the book in italics, interspersed with what these felt to me while reading.

Bare toe-ringed feet on the berth, chin resting on knees that she hugged close to herself, she occupied no more space than a curled up dog might, and appeared to be just as self-contained. (Toffee boy, he could be self content with just some petting 🙂 how simple, how easy.)

I got stuck trying to explain what a jamun was: was it sour, sweet or bitter? How to explain its strange taste, and the way our tongues went purple and fat after eating them? And wondering how to explain jamuns, I would be distracted remembering how all day we did our lessons or chores as if we boat girls were like other girls, but at night I would hear one girl grind her teeth fiercely enough to set mine on edge and another girl sob. Only when I felt my pillow wet with tears and spit would I know I had been listening to myself crying.

What is memory, what triggers a thought from the past, a reminder, certain something…like when she ducks to find her fallen crayon and remembers when she ducked in the fateful van in which she was taken away, looking for her fallen baby tooth, and now in the classroom she finds Piku when she ducks. Or the shell necklace, reminding of what transpires between her and her foster mother, or the wooden toy boat reminding her that she is a boat girl, someone who had no land to her claim, attached to nothing.

No strings. The whole idea was to let it go – we made it as perfect and seaworthy as we could. But after that it was on its own.

A kite skimmed the sky, knife-sharp. It flew higher and higher. Her eyes followed it into the limitless emptiness of unblemished blue, not a wisp of cloud. The kite climbed further. It was a speck of sunlit red in the blue air.

Some things are forbidden, you know that, don’t you? We need rules when we live together.

Don’t you wish it could happen? Your mind wiped clean, like a hard drive? Start again without memories?

I have never felt this kind of straight forward happiness…

“Do you usually talk so much with people you’ve just met? I don’t. I haven’t told anyone else that stuff about staying back at a random railway station.” ….every woman he’d ever known melted away when you said this kind of rubbish. They felt they had some special quality that made men confide in them. (Watch out women!)

…sidestepped tiny, translucent crabs which dug themselves out of sand and skittered towards the water, disappearing again. Any of us who have walked on a beach, bare feet,  looking down, so that not to step on a piece of glass or garbage, looking for shells, would have seen these crabs. I used to be wonder-struck at times when the tiny crabs swarm around your feet to get away and hide again.

…the musky smell of rain-wet earth in tea served in clay cups came back to her. She could not remember when she had last had tea smelling of rain.

Someone is forgetting and someone wants to forget…

There was something perverse about Gouri’s amnesia, it had an unfailing way of making her blab about the wrong things.

…the scent of those flowers still brings back that day.

Everyone has looked after plants sometime or the other.

It was a voice from long ago, a voice that contained grains of sand, winds from the sea. Why hadn’t she heard it as clearly before?

..to run away from life – as if life were something that you had to grit your teeth against and endure. She said he was an escape artist – when all he wanted was the freedom to just be, to come and go without hundred accusatory questions..

Can’t you sing a happy song? Why are all your songs so gloomy? They are not sad for me. They’re all I have left of my world. I have no cameras like these tourists – clicking all the time. Smile, smile. Click! He had tapped his forehead. I keep it all here, it makes me happy to remember.

When she chanced upon a spellbinding place she kept it a secret, as if it existed only for her.

I wish I did not have to read the nauseating details of the ashram and guruji. But like I was asked once about The God of Small Things and about the child abused in it, “does it really happen?” So I guess the abuse still needs to be written, still needs to be told, still needs to tell who the culprits are.

Shabari was a simple-minded woman who thought of God as someone very like herself, as a friend of hers. “She has tasted each one because she could not bear to feed me a sour or poisonous berry. How can I do otherwise but bless her with heaven?” The moral is that true, simple devotion is worth a hundred such displays.

He dreamed of living on Jupiter and sleeping under its many moons. When his teacher had told their class it had sixteen moons he had wanted to ask her if this meant that there was full moon on Jupiter every night? Or were there crescent moons and half moons all at once in that other sky?

At day’s end, like the hush of dew comes evening

The kite wipes the scent of sunlight from its wings

All birds come home, all rivers, all of life’s task finished, only darkness remains

Badal, Jugnu, Piku and the guilt of surviving.

That I guess is a difficult closure to get.

I could not have not read this book, long-list, short-list, who cares?

This site uses Akismet to reduce spam. Learn how your comment data is processed.